I have to admit, one of the best parts about being an artist is the "Surprise" factor. It's the doing something special, and making something extraordinary that will not only mean something for the recipient, but will get Oooh and Aaah from the assembled as well. Recently I've been involved in a social club that uses calligraphy and illumination for their awards. Half the time I don't even know the person involved, but it's fun to hear the "Ooooh!" when something is presented.

More recently I've been getting involved in competitions as well. Some just for fun - fan art competitions as hosted by my favourite authors, or designing something that might one day be a mural in a town hall. I'm careful not to get involved in any competition that has "We own anything you send us" in the fine print, and as a result, I'm better about reading fine print. Which seems to surprise people. 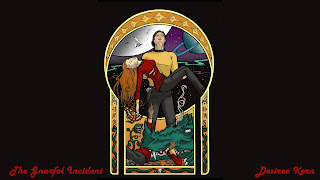 Edit: I won 2nd Place. WOO HOO!
I've also recently branched out into leather work as a new medium. (This is where PETA gets uppity at me. My philosophy is if I'm going to eat a tasty steak now and then, the rest of the animal should be used too.) The interesting thing about leathercraft is it's a little more like sculpting which has never been my strong suit. I've worked mainly 2 Dimensionally most of my life, so now branching out into something that is as much a craft as an art form is new, and exciting.
Posted by Unknown at 11:11 AM 1 comment: