A little while ago I posted about the mural I did for Torran, an austistic boy who needed a Space themed room. Lesley, his mom, posted the final photos showing not only the mural but the furnishings which kinda make the mural look complete, since I had to leave large chunks of space to allow for furniture, so the mural actually looked a little incomplete.

She's got images posted here http://realwomendrivestick.blogspot.ca/2013/09/finally-renovation-reveal.html
iffin you'd like to see the finished product. (Not to mention take a gander at her snazzy new kitchen. I'm attempting not to be green with jealousy at the great space she and Bruce have created in their home.
Posted by Unknown at 12:10 PM No comments:

So the short version is: CHANGE.

Everything in the last month - job, life, art projects, housing, even the computer decided to die on me. The computer situation is remedied, but the rest of it is still on-going. I was fighting being nicknamed the "Nomad". Now I've just embraced it. I don't know where all this change will take me over the next few months, but I'm hoping it'll be a bit closer to friends and family. If nothing else, I will be staying with friends and family until I can find somewhere to settle in for a while.

However, in the changes have also come beginnings: 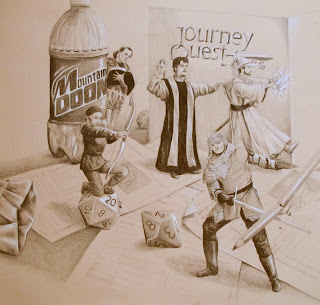 I've begun working with the folks over at Zombie Orpheus Entertainment, specifically with writers Matt Vancil and Kevin Mickelson, doing illustrations for the JourneyQuest RPG that was unlocked with 300 subscribers. I'm thrilled to be working on the project, and hope that you will check it out, and possibly subscribe to help the community and media (films, games, and more) grow as a continued fan-supported series.


You can check our JourneyQuest Episodes on Youtube.com.  I'll post more on that project as it develops.

Sylvermoon Chronicles III from Quicksylver Productions is out now, which contains a short comic collaboration that Eric "Takkless" Ray and I worked on over the course of last year, as well as another short story by yours truly, along with a ton of terrific authors. (The cover of the book is also a collaboration.)

We're already working on Sylvermoon Chronicles IV, and I cannot say how excited I am to be part of the continuing series.

I also have several children's books lined up for illustration (alas, not for public consumption), wedding portraits, and I'll be spending a day at the Pet Valu in Kincardine, Ontario, doing caricatures to raise money for their pet adoption program.