I was sitting around with my Waterloo friends last night having a good time singing and talking about the myriad of things that come to mind late at night (sans alcohol, since I had to drive home, though most of the others were pretty tipsy). One of the things that came up was the stories behind the drawings I do. I learned a few things, that I had not known previously, and got better explanations for other things, like subtleties that I had not picked up on. (Subtleties are in Italics.)


Why My Art Hanging in the Bathroom is a Compliment:
Several years ago my friends picked up on the idea of caricatures for gifts for each other for birthdays. Strictly birthdays - Christmas, and other holidays don’t apply. Ian was the first to receive one, and had adored it, either due to the sheer number of inside jokes worked into the scene, or the fact that he’s slightly vain and totally enjoyed having a unique image of himself as a pirate. Either way, it was promptly hung in the powder room adjoining the kitchen. 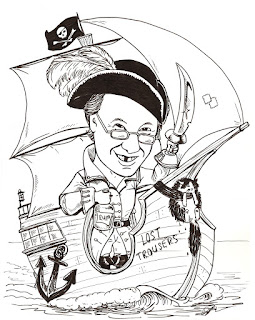 What I didn’t know was that sparked an argument between Ian, (Captain Salty, of the Lost Trousers), and the mastermind Gin. Gin pointed out that I was likely to be upset that my hard work had been hung in the bathroom, while Ian pointed out that to him it was a place of honour. The argument was short-lived since I was due to arrive any time, and the other party guests needed tending to as well.

I arrived at the house and predictably used the powder room after a few drinks. I saw the drawing and I admit, I was somewhat disappointed – I had hoped at very least for a hallway. When I finished I found Gin in the kitchen and made a verbal note of my disappointment. Ian and I had never been close friends, but I admit to having hoped it might have been at least a “little” important to him.

Gin was (of course) horrified that I felt that way and proceeded to explain Ian’s actual reasoning for the placement. Since she had only just had the exact same conversation with him. To him it was a place of honour. It meant that he would look at it at least four or five times a day, and then be able to step to the right and see himself again in the mirror. Since it had not occurred to the women (since we don’t pee facing the toilet normally) that this placement would be ideal. He wanted to see it, and often, so he put it in a place he would never miss it.

Last night, Ian re-iterated his choice, though his currently hangs on the living room wall with Gin's caricature, the latest in the series. Luke pointed out that it was awesome in the bathroom, however the sight of Kujo (Ian’s cat) being tied to the prow as the figurehead of the pirate ship looking pissed off always made him giggle which made it harder to aim while answering the call of nature, it's really better this way. Note to the boys out there – I understand it’s a place of honour now, however, if you want to be kind to the women and germophobes who might be using that room… place something less funny on the wall so your aim is true. (And for the record, Kujo is almost always pissy, and no cats were actually soaked in the making of this caricature.)

Achievement Unlocked: Decade
The subject of Gin’s son Kael, who will be 10 in March, came up. I was boggled and very amused by his concept of how caricatures work. The system we use for determining whom gets the next caricature (which is mainly who’s birthday is up next?) was a mystery to him, so he had somehow come up with his own system. Apparently, Kael believes that when you accomplish something big, you get your caricature done by Desiree. He couldn’t say what the achievement was, just that you had to do something special or accomplish something to earn it. Surviving to your next birthday is really the only real requirement, (or so it’s been for the adults) and it’s flattering and endearing to think that this nearly-10-year-old has decided that it’s important.
Since his 10th is coming up in March, and they had brought up the subject about having his caricature done, I have lots of time to prepare for it. It WILL include the words “achievement unlocked: Decade” on it, for the video game crazy boy who thinks my retired dad is amazing for having beaten Skyrim twice. What else will be in the image? We’re working on it – the boy really does have terrific parents, who encourage him to find new hobbies, go fishing, and learn as much as possible, which means he does *everything* a child can do, which means there’s a large amount of subject matter from to which to choose. 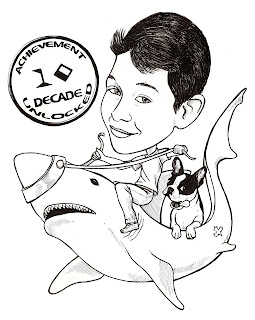 Kaelwas happy to get his "Decade Unlocked" caricature, and I think mostly impressed because he's riding a shark with his dog going along for the ride. Family unit is now also complete with 1 caricature per person.

It's hard to find a good Muse these days. They tend to be fickle.
It's not that I have a lack of ideas (I have sketchbooks *full* to the brim of ideas of things I will eventually have time to paint or create) but occasionally people need or want things that result in me needing to find new ideas. My inhuman Muses tend to be things having to do with water. Several years ago I invested in a set of the children's shower soap crayons, since ideas tend to hit me while I'm showering, and if I don't write it down on the stile walls, I will be distracted by dog or human when leaving the bathroom, and risk forgetting the idea. I keep desktop fountains in my office, and run them when I'm feeling creative. I occasionally pop by Niagara Falls, just to hear the constant thunder of millions of gallons of water flowing over a cliff, (which is by the way, truly awesome in all senses of the word) and I have fantastic ideas while I'm there.
As far as the human Muses go... they're a whole other bundle of fun. I have a few I have named My Muses, as they tend to be the ones I spend a lot of time with either talking or socializing, and it's when we're talking that the creative juices start to flow. There's a group in Waterloo Ontario that tend to have that effect, though it happens more often after beer and vodka have been introduced. More than once I've walked away kicking myself for not having a digital recorder on me during the discussion.
Once of the difficult things I find in art is when someone I don't know tickles my Muse. It's hard to walk up to someone with a face full of character and say "I want to draw you", since I imagine it can either be very flattering, or sound VERY creepy. I have the advantage of being a harmless looking woman, so I can push that line a little bit, but I'm aware some folks tend to find it creepy regardless.
Recently I had someone ask me if listening to his music compositions would inspire or speak to me. I had to tell him honestly, no. Music rarely speaks to me in a way that I can translate into a visual image. There are a few pieces, but normally that's not where my inspiration comes from, and I almost feel like a freak among artists in that regard. Music will tickle my musicality, and I certainly can appreciate everything from an Aria to death metal/celtic fusion, I'm just not generally inclined to draw based on it. I'm more inclined to sing in that case.

Posted by Unknown at 9:54 PM No comments:

We all have our hobbies. Being an artist, I'm entitled to all kinds of weird hobbies, though I do limit it to things not in danger of getting me arrested, sick, or maimed. One of my personal hobbies (within the realm of fandom) is getting autographed pictures of my favourite icons and actors. Not just any pictures: Portraits. It's something unique for me. And no, they aren't something I resell. They're MINE.

Most recently I was fortunate enough to be able to make it to Toronto to see the Bloggess, aka Jenny Lawson, in person. I have only recently started reading her blog (maybe 6 months ago) and already I'm in love with her writing, and her book. So I did a drawing of her, and asked her to sign it. 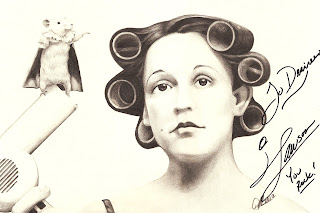 Her reaction was mainly silence for a good 30 seconds. Some famous folks have seen other portraits (I'm sure I'm not the only geek that does this) and had fairly neutral reactions. Jenny seemed stunned and genuinely touched by the art. Once her voice returned she asked for a copy, which I promptly emailed tonight. It's now safely tucked away with Linda Hamilton and Wil Wheaton. When I have a house with lots of walls, I'll be framing them all and putting them up so I can say "I totally met all these people and enjoyed it  because Iiiiii'm a geek."
Posted by Unknown at 9:48 PM No comments: