2015 has been a year of loss. With the exception of a fantastic trip to Las Vegas to see old friends, it's been pretty brutal. The most poignant loss however was that of my old order Amish grandfather, Lester. I got the call saying he was dying during an already turbulent and saddening time. I admit, I'd hoped it was similar to other times when he'd sprung back from the brink of death. I'd been planning something special for his 100th birthday. Namely, the portrait I wound up doing as his and my Grandmother's final tribute. 24 hours after the first call, he had passed, despite my hopes he might make it another day or so for me to go and see him. It was a 6 hour drive, and I had responsibilities I couldn't simply leave behind, no matter how much I wanted to. My grandmother Mary had passed away many years previous, and I had missed that funeral due to lack of ability to travel, so I didn't want that to happen again.

The night before I left to go to the viewing/funeral, I began the portrait, hurriedly trying to block out the composition and at least get everyone's faces outlined. It was difficult, because it's always difficult to look in to the face of someone missing from your life, but it was also somewhat cathartic. My grandmother's face emerged on the page as I watched Guardians of the Galaxy, (talk about a paradox there) and by the time I was satisfied I'd captured the smile I remembered from my youth, it was time to sleep.

The next morning was a whirlwind 6 hour journey to the church across the street from my Grandparents old farm, which had long since been sold to pay for his care. Everyone commented on the greenhouses the new owners had added, and the interesting set up of allowing college students to come out and work in exchange for a bag of fresh food. It was still the same old farm. Upon arrival I actually drove past the church, and only realized I'd gone too far when I saw the familiar landscape of the farm, the old barn and the 2nd of two houses, the first having burned down Christmas 1985. I had many memories of the farm, which I decided (mid 3-point-turn) needed to be part of the eventual finished product.

As an aside: When I was a child, in the 1st house, there was a metal air vent between the upper hallway and lower living room, where I would sit and watch my older cousins as they rough-housed, or drop seeds or beads onto the unwary. No one was in it when it burned down, and some furniture and a few things were saved. When the new house went up, it had huge bay windows along the side where my brother and I would sit and watch the horse & buggies go by, or examine my Grandmother's seashell animal creations.

The viewing was long, and hard (see: introvert hell) and I ended up leaving a few hours early for the sake of recharging my already drained batteries, and the chance to spend a couple hours alone working on the portrait, knowing once my aunt & uncle, cousins & parents all returned to the house, it would be distracting and I would likely be part of the conversation and not able to draw. The photo of my grandmother had been sent to me by request from my Uncle, since the one I have of her was hidden in a box somewhere in storage. The photo of my grandfather however was one my mother took on my last visit to see him. We were waiting for the home's church service to start, and as usual, I was drawing to pass the time. He was very amused with my comics, and the photo reflects that amusement. When my uncle sent me the photo of the two of them, I loved my grandmother's smile, but I wanted the amusement of my Grandfather's face from my mother's photo. It wasn't just because it was a better photo - the smile was for me, or at least because of me. There's something far more charming about it, though it was likely a lesser photo than the others I had.

I wasn't really satisfied with it, when it was "done" - I hadn't had time to add the farm, but I did have time to finish the faces, which was really the point. I'd grabbed a frame, and borrowed a few tools from my Aunt & Uncle in order to trim the paper and secure it. I'd brought an easel with which to display it, knowing it was a last minute addition, and it would be better received by the funeral director if I had my own way to put it up, rather than bothering him. In the end, it was what it was - a final tribute in the only way I knew how. 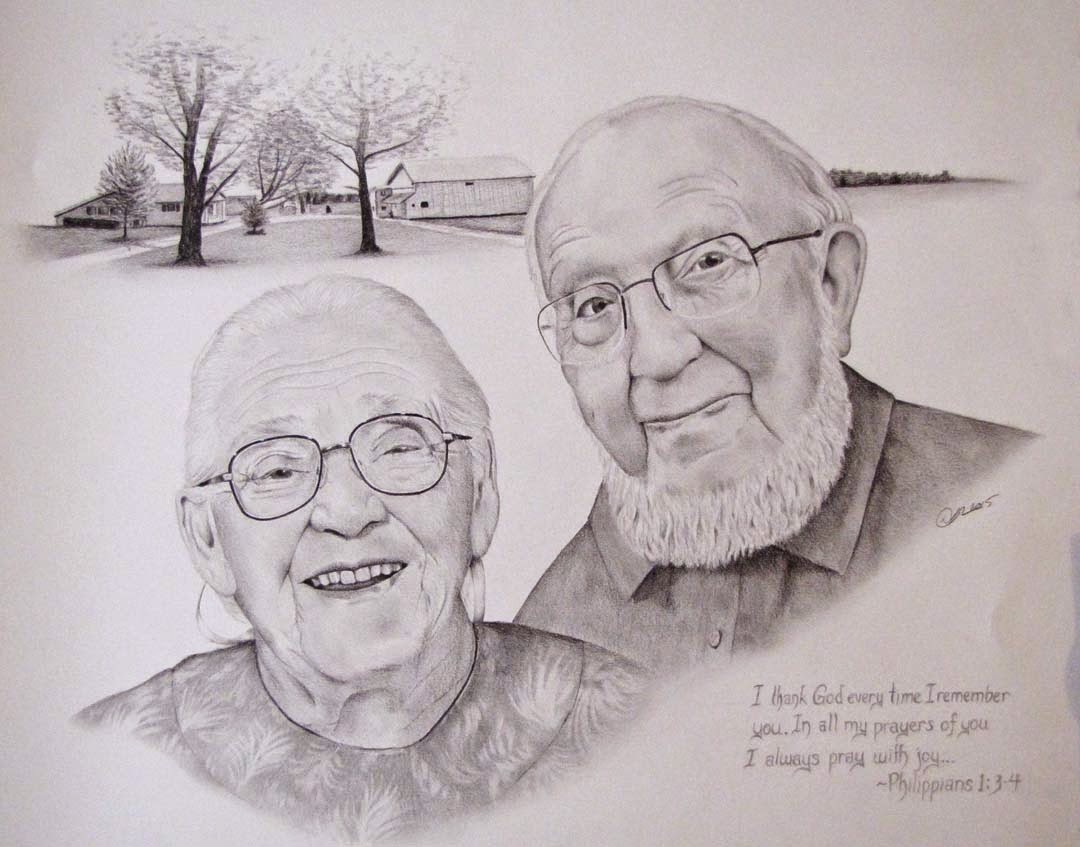 It's very difficult to explain our relationship. We were separated by many years (he was 99 when he passed) and by many cultures. He was an Olde Order Amish man, with simple living and the same 2 eggs over easy every morning for breakfast, like clockwork. I found it difficult to tell him about my life, because I never really knew how much of it he understood. Breast cancer and copperhead bites were within his grasp, but the world traveling to odd museums, colour runs, haunted forests, photo-stories and artistic adventures were well out of his reality, and I'm never sure how much of it he understood when I tried to tell him about it. Then again, at the funeral I found out he liked onion sandwiches, which boggled my mind and made me think I might have inherited some of my strange food tastes from him. One of my 2015 belated New Year's resolutions is to try an onion sandwich on his 100th birthday.

His death was not unexpected (he was 99!) but it's still hard to know that font of love is gone. I miss them both. My only... not regret, but disappointment, is that I couldn't show the portrait to him sooner. He was such a tough old coot, I thought he'd make it to 100, and on that day I'd show up and say "Ta Da! Happy 1 Century!"
Posted by Unknown at 10:38 AM No comments: