2014 has been an incredible year for art so far. I'm rather astounded by the projects I've been privileged to be part of, as well as the projects I know are upcoming.
The Transmigration of Cora Riley has been out for a while now, and it's encouraging to see how well it has been doing. Author Ellie Di Julio has been working hard on the second book, and we're talking about what the next year and campaign will bring. I'm very excited to see how it goes.
The Cover for Echoes of Memories Past by MarkHolborn has been presented, and the book is due out any day. I read part of the book in an effort to create the cover, and I'm really looking forward to reading the rest of it.
Ad Astra's Art Show had a spectacular turnout, and I'm both humbled and awed by receiving the People's Choice Award for my Cherry Blossom Dragon drawing. It's been a long time since I've won a major award, and I was thrilled beyond measure to receive it. (The pencil version of the Mecha-Pegasus also received an Honourable Mention from the juried portion of the convention, which was an additional bonus.)

My dear friend and collaborator/competitor/comrade in art Eric Ray* also had a personal triumph as Donato Ginacola and the Convention Chairs tagged his air-brushed hoodie portrait of Nikola Tesla with Best in Show. It's always nice to see someone whose work I adore get the recognition his work deserves. I've been encouraging him to show his work more, and all but begged him to show them in Ad Astra's gallery show. There is a certain insane level of irony of inviting one of my biggest competitors (when we're working separately) to a show, only to have him win Best in Show while I win People's Choice. There was a lot of "In your FACE/CONGRATZ!" between us when we both got the news. 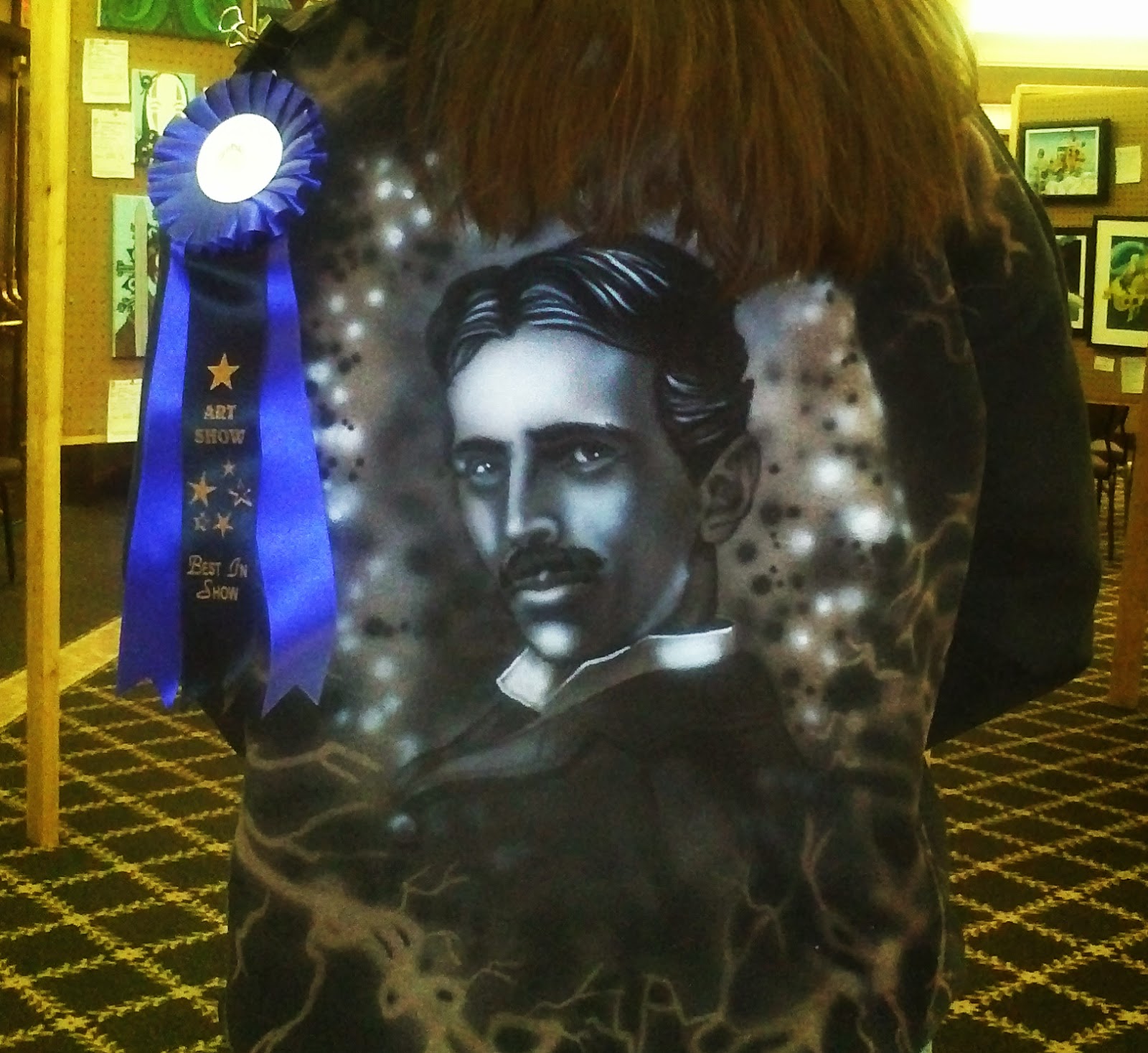 The other Honourable Mention went to my Photographer friend Tom, who's Dryad Grooming Her Tree photo stole a lot of hearts during the show. Congratz to Tom as well!

Most recently, I had the opportunity to do a bit of mural work for a friend of mine. He's designed and created his own vintage style "Theatre Room" in his rec room, and brought me in to do the gold painting on the sides of the stairwell, and under the light sconces. the room even includes a hot dog roaster, a cotton candy maker, a popcorn popper and gumball machine with a brighter than can be believed without seeing snacks sign, a bar with a ridiculously large beer stein, and assorted movie posters and vintage decor gathered together. 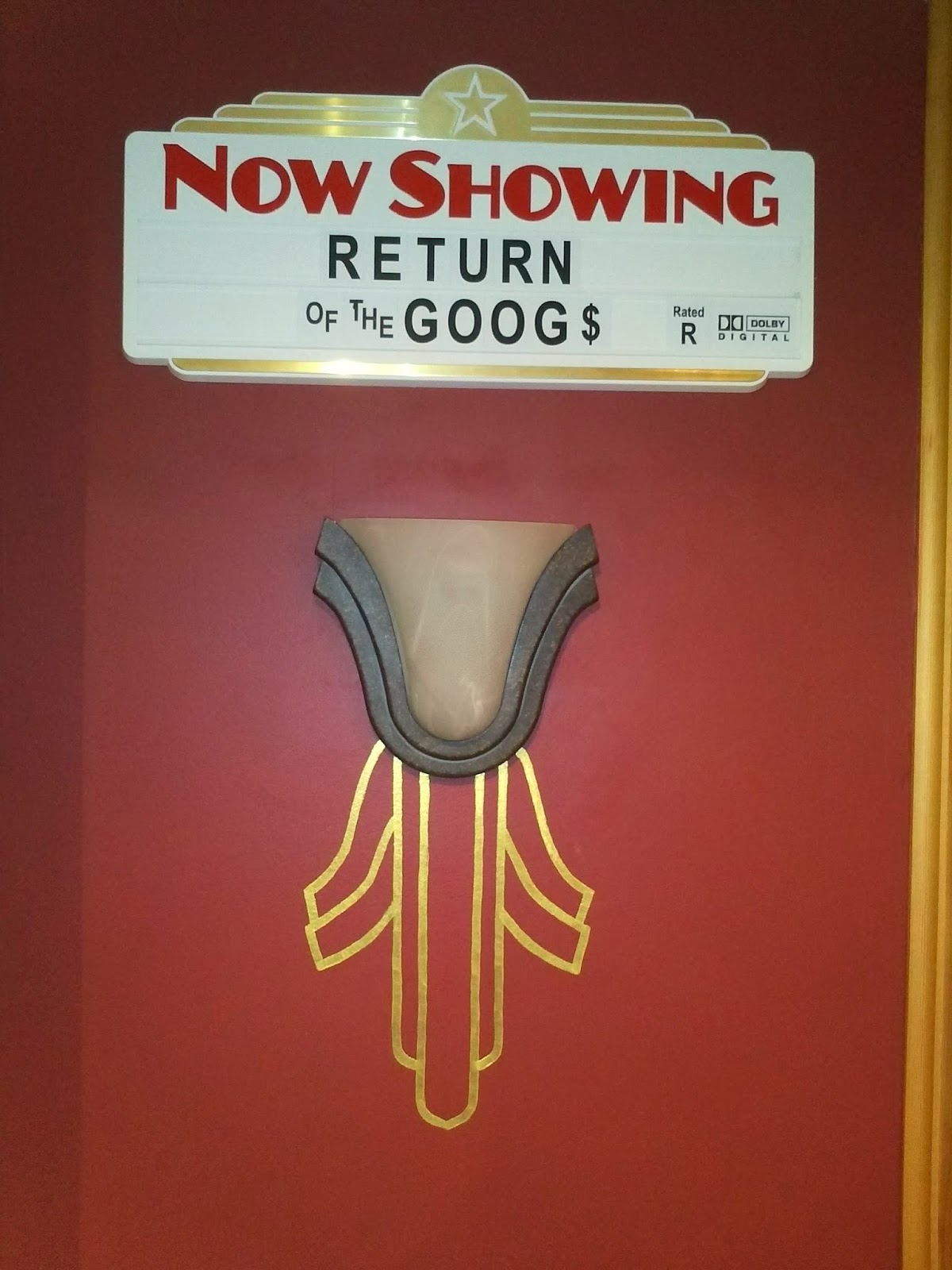 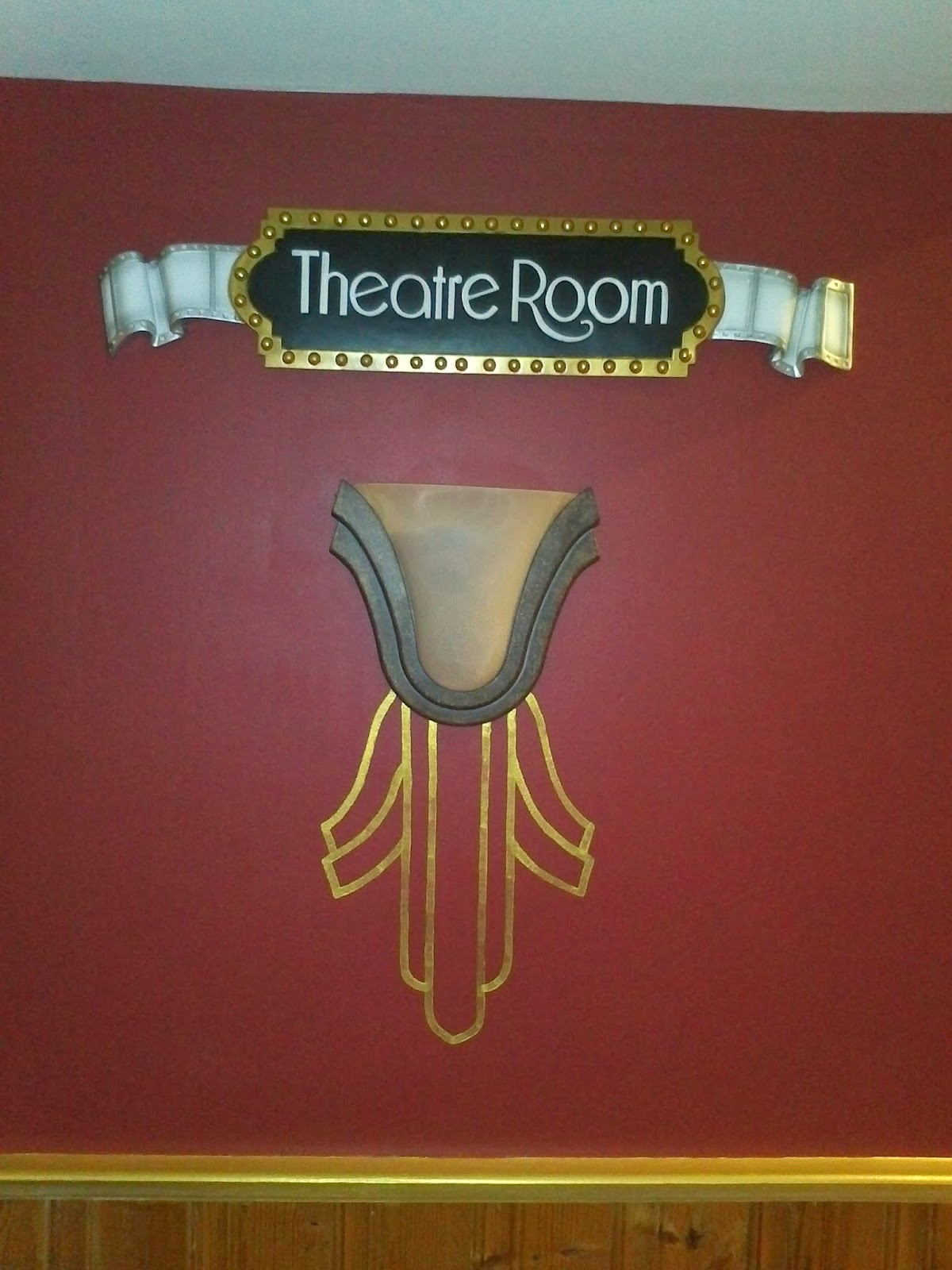 What I love about the room (besides the theme) is the fact that it's comfortable. You can go in, sit down, and relax in a social atmosphere without the feeling of "don't touch! Museum!" He's created a space that feels welcoming and inviting, and includes many of his favourite things. If I had someplace to put it, I would plan a daring heist, gut the whole thing and put it where I could have it. Since I do not have the space, I'll just have to go hang out from time to time and enjoy it with him and his friends. And Harry, "The Googs" Feline, who insisted not only on "helping" (which involved mainly chewing on paint brushes and cuddling me when my hands were full) but on affectionate cuddles before and after the painting was done.
The unfortunate thing is the angle of the stairs and the lighting make it very difficult to effectively photograph the final paint and design, and I'm afraid the photos just don't do it justice. They're the best I have until I can go back with a camera and tripod and fight for a better angle and better photos. I was just too excited to wait to post. It'll be another week before I can return to add a few finishing touches and take better photos. 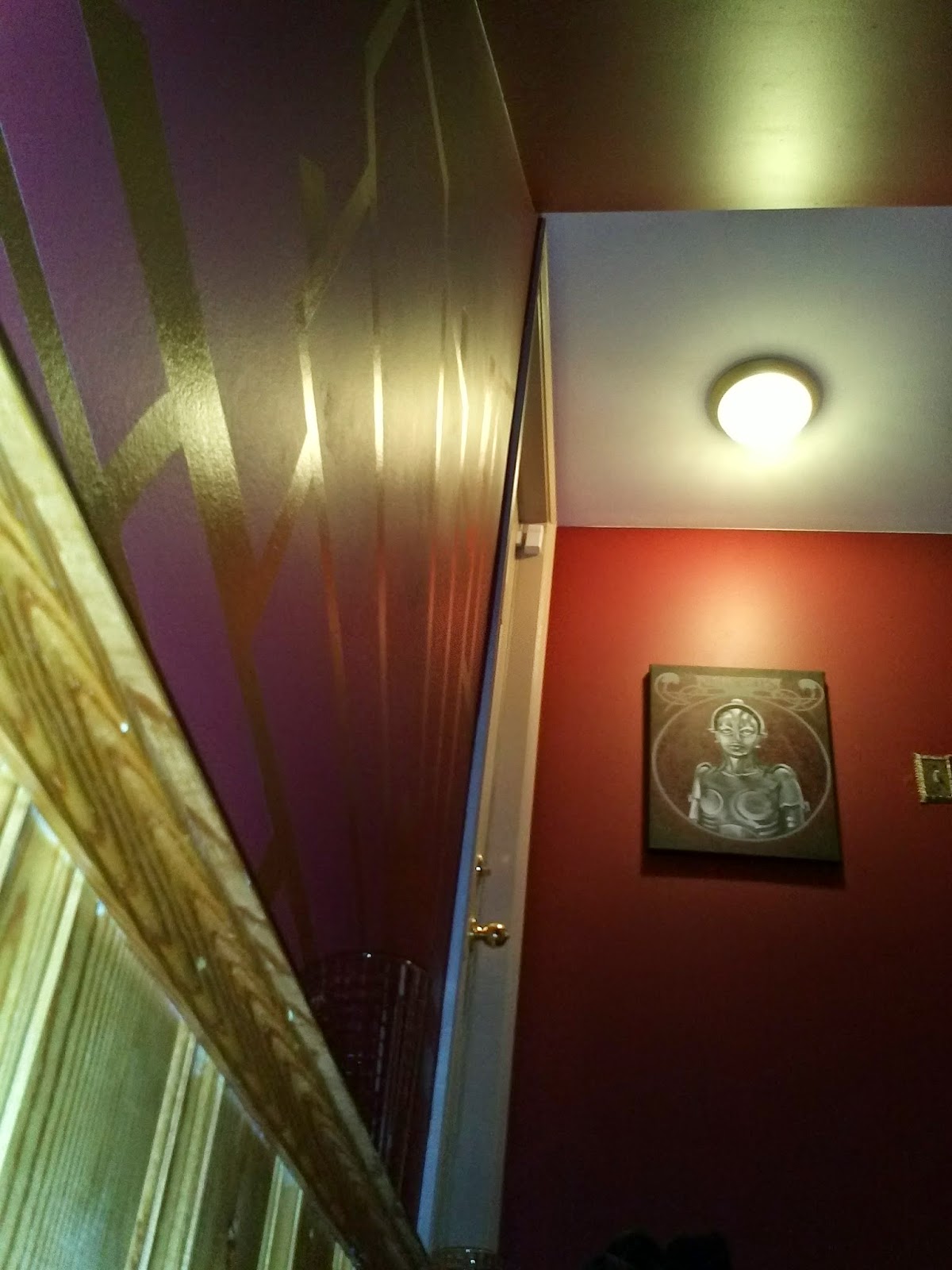 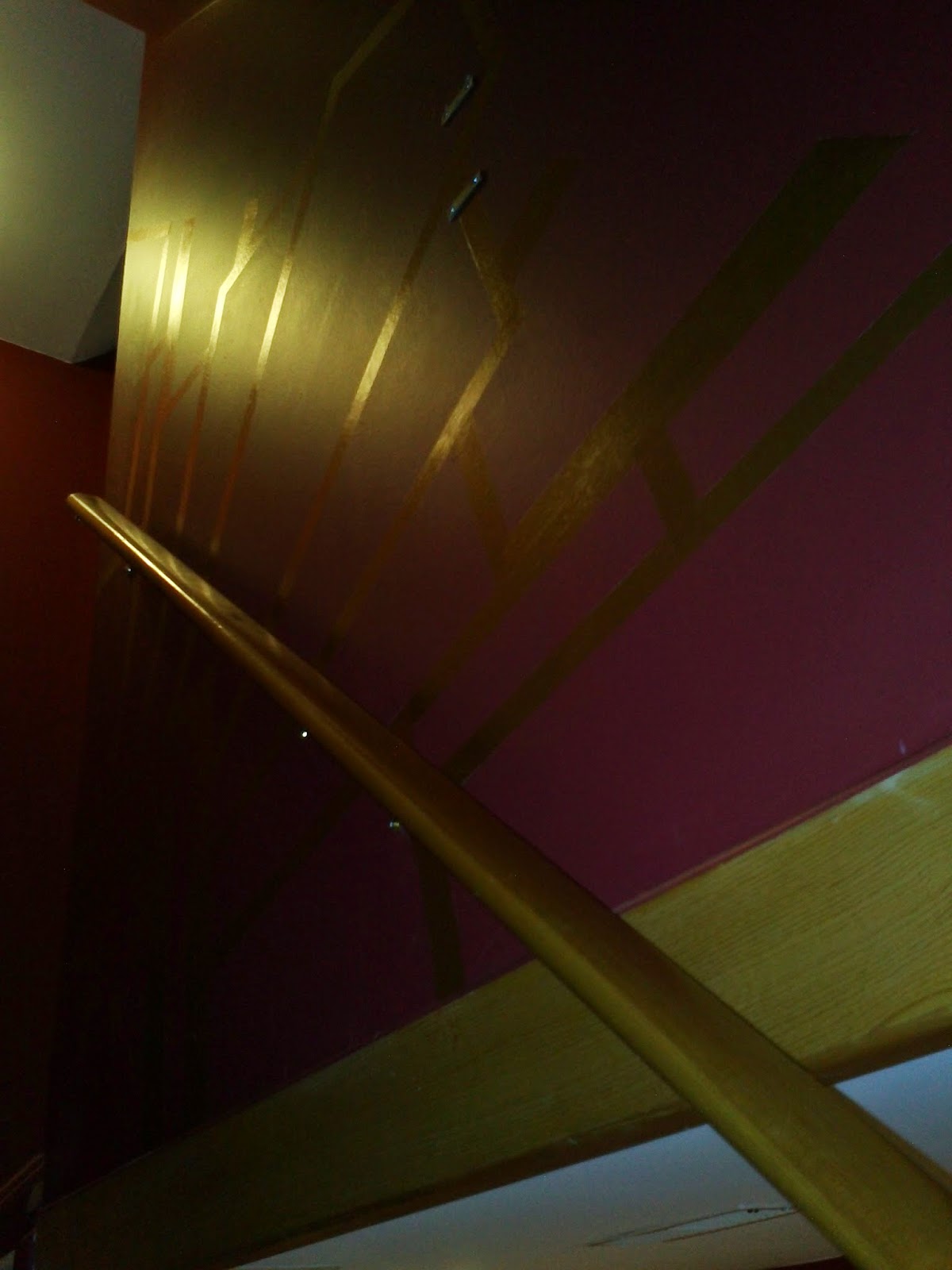 *Eric has appeared in this Blog before, as a collaborator with the last Sylvermoon Chronicles cover, my partner in crime at DragonCon 2008, The Graveyard Shift comic, and several up and coming projects. They'll be announced when they're ready to be produced. :)